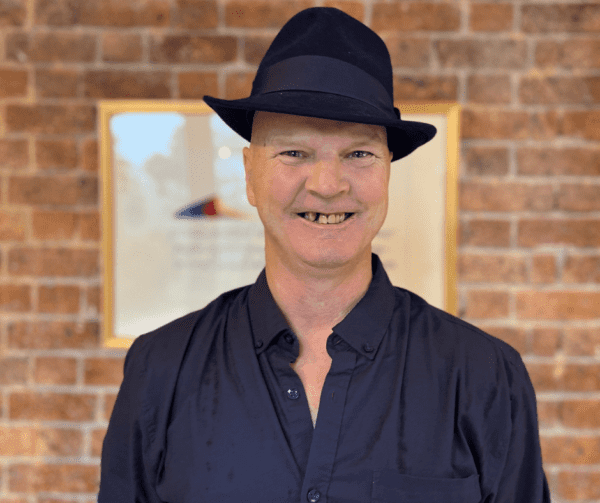 Quest program participant and NDIS recipient David has a message for other men who are struggling with their mental health or experiencing one or more of life’s Ds – whether it’s despair, divorce, disaster, a diagnosis, a death, or drug dependence.

David, who lives with chronic pain and post-traumatic stress and has lived through a host of other Ds, attended Quest’s Moving Beyond Trauma residential program in March after participating in the Taking Control of Chronic Pain and Healing Your Life programs in previous years.

“Without Quest, without my psychologist, and without my GP – I’d be dead,” David says.

“I totally turned my life around. At my worst, I wanted to be dead. I didn’t want to be in the world. Laughter used to make me angry, the sound of birds annoyed me.”

“I was running my own business and managed to come off a ride-on lawnmower, that almost cost me my life. Then I lost my partner and I ended up very alone. At the worst of it I ended up living in a supported residential service (SRS) in Melbourne.”

After speaking with his GP, David discovered Quest for Life and made his way from Victoria to Bundanoon to take part in Taking Control of Chronic Pain, a five-day residential program held in the Southern Highlands of New South Wales.

“Petrea came up to me at the end of that course and said, ‘you’re nowhere near ready to go,’ and she offered me to stay another week. I was still unwell and truly in the grips of chronic pain due to chronic pancreatitis.”

At the time, David struggled with an opiate dependence formed due to the pain associated with his illness and an earlier injury but felt so strongly about what he’d gained from his experience at Quest that he resolved to return again.

Years later, David has come a long way on his healing journey and is turning his life around, but wanted to refresh the skills he’d originally picked up at Quest – including practising mindfulness and meditation.

“I’ve managed to escape the SRS and I’ve got myself a little unit back in the mountains where I used to live.

“I wanted to experience a program without all of the haze and fogginess of painkillers and to strengthen my skills in meditation, to keep the black dog at bay.

“So I came back in March and did the Moving Beyond Trauma program. I’m on NDIS now, which made coming up from Victoria so much easier. I want to make it a once-a-year thing.

“I personally believe Quest should be in every state of Australia.

“Meditation and mindfulness have helped me greatly. I tell people now that meditation is my medication.

Asked what message he had for other men who are struggling in their lives, David said that in the immediate term, they should find a way to make it through one minute, one day, one week at a time until they can access help.

“I really want to encourage men to leave all their self-consciousness and worries. Holding those things in is going to make you ill, possibly to lose all you hold close to your heart and it WILL shorten your life.

“The biggest fear – especially for men – is the feeling of being judged. I’ve got all the Ds – disease, divorce, disaster.

“No one needs to know where you’re going if you decide to visit Quest. If this little bloke can do it, you can too.”

Please consider Donating to Quest and help someone heal from trauma.